This page contains several savefiles dumped from cartridges that were distributed a plethora of event pokemon directly from the Pokemon Center New York PCNY distribution hardware that recently surfaced. Hopefully it provides enough public satisfaction for everyone, while the preservation team undertakes this grand and lengthy task of hopefully enabling the software to become usable via emulation, as well as hopefully producing hardware mods for a publicly feasible physical method of distributing. This is our most major project by a long shot and will likely take quite some time, however now that everything is permanently in Project Pokemon's possession, any roadblocks toward the final goals would be on the technical side. Luckily the best minds are at work on each aspect of this project, so without revealing any further details in regards to that, have patience and remain optimistic.

For Generation II, three full boxes per campaign were distributed, with the TID for each incrementing from 00001 to 00060. This Gold savefile was loaded using the PCNYc memory card in Slot B of the NR GameCube. Four Gen 2 campaigns were preserved from the Slot A memory cards obtained. Each box will have at least a few of every pokemon from the respective campaigns, even those with normally extremely rare unlikely odds. 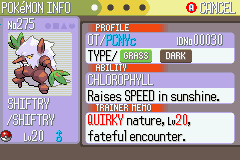 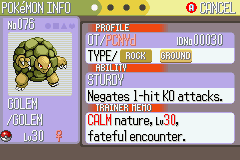 Removed extra lines of hex following the footer of the Gen 2 savefile. This gets added when you run Gen 2 saves in an emulator for RTC data, which will cause errors when trying to rewrite to physical cartridges.