Author's Note: This is just a fun opinion piece, with very little facts substantiating my claims. More of a 'speaking from my experience' type of thing.

Back when Neo Destiny was first up for purchase on my sunny little island, I was excited. Finally, the return of the Dark Pokémon, and also the introduction of Light Pokémon!
Unbeknownst to me at that time, Shining Pokémon was also a secret part of the expansion. When I pulled my first Shining Celebi from a booster pack, I was thrilled to bits!
But something felt pretty off to me: why does this card even exist? 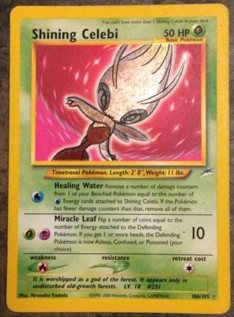 Image source. Chose this image, cause it shows the glittering effect.

Shining Gyarados was in Neo Revelation possibly due to it's prominent role in the story of Gold, Silver & Crystal at the Lake of Rage. Heck, Neo Revelation's expansion symbol, booster artwork, and also card artworks heavily features the Legendary Beasts roaming throughout Johto (which potentially shows that the TCG was following the games or anime lore closely).
All the other shinies in Neo Destiny can be encountered in-game (plus Shining Noctowl was also possibly referencing Ash's Shiny Noctowl in the anime), so why does the Shining Celebi card even exist, given it couldn't be encountered in-game?

Of course, since I was then only exposed to the English/International versions of both the TCG and Pokémon Crystal, it was natural that this question weighed on my mind, as the card's existence was lacking context. Context that could have been much more clearer to me if I was living in Japan.


Pokémon Crystal in Japan has connectivity to the now defunct Mobile System GB service, which updates an in-game message board every month.
Between the months of April and May of 2001, the message on the news machine will be updated to show something that translates to "The present which exceeds time" 1.
It was only for that period, that players will receive the GS Ball, and that can only occur after you beat some mini-game and quiz, which was only possible with a game save that has all 16 badges.
Now, Neo Destiny was released in Japan in March 2001 2. In this timeline underlined, this card could have easily been foreshadowing the fact that players have a chance to get Shining Celebi in Ilex Forest via the event.

And before anyone points out to that "Hey, the expansion before it, Neo Revelations, already had Celebi in it", I will like to in turn point out other key date's along our timeline:
1. Players in Japan could first receive Celebi on their copies of Gold and Silver at a real life event in August of 2000 3.
2. Neo Revelation in Japan was released in November 2000 4.
Given how these events typically goes, the DVs are likely fixed, hence said previous event would have yielded only non-shiny Celebi.
Hence based on the timeline above, players likely already knew of the existence of Celebi, but probably never seen a Shining Celebi (without hacking), not until that Shining card was first released.

At this point, some of you may be thinking "So what?". To answer that, here is a currently unavailable Shining Pokémon that was showcased officially by the TCG before it was released to the games. 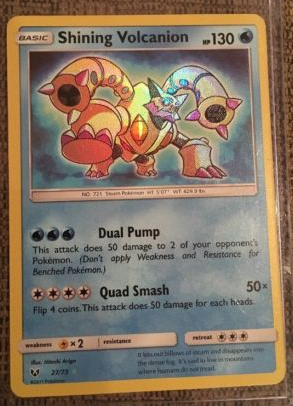 Image source. Once again, I chose this image, cause it shows the glittering effect.

The expansion Shining Legends was released July 2017 in Japan 5, and it was the first time in years they brought back the "Shining" prefix to the TCG series.
Curious enough, Shining Volcanion was given a card when a distribution for it's equivalent in the core series games have yet to be done.
And as of the date January 2018, players have yet to receive a Shining Volcanion in-game, to go with the card.

In recent years, it is not uncommon to have a "Shiny lock" broken for the game, and be commemorated by a close release of the TCG equivalent:
1. Shining Tapu Koko event was first released to Japan in March 2017, with the card equivalent (GX and standard) available concurrently
2. Shining Xerneas and Shining Yveltal common serial code event ran unceremoniously in October 2016, and the cards was obtainable in July 2016
(international versions got the Shiny Kalos Tins and the game variants pretty much concurrently, I may add.)
3. Shining Genesect event released in Japan July 2013 to promote the movie, and the promo cards was released concurrently.

Additionally, such types of TCG and event gift tie-ins have been occurring for other shinies as well:
1. Shiny Silvally Event being Sep 2017 in Japan, and it's card released in the same month (GX and standard)
2. Shiny Rayquaza Corocoro Event and the TCG campaign running concurrently in March 2015.

It is possible for me to list non-shiny examples, to show other tied releases between TCG and events (Zoroark for EX Breakpoint, Lycanroc for Guardians Rising, Salazzle for Burning Shadows), but a bulk of these are non-Japanese, so I am not sure how relevant it would be to refer to it, when typically Japanese events breaks the shiny lock first.

But of course, with any opinion piece, lies examples that tears through the flawed logic.
For example, TCG alternate colored cards that did not get a game gift mirroring it's release in close proximity (random shinies like Blastoise from BW era, or Shining Arceus from the same Shining Legends expansion mentioned above, or even the limited edition Corocoro Shining Mew card from Neo Destiny era, Red Gyarados in EX Breakpoint).
Or perhaps core series Shiny events that did not get a corresponding card mirroring it (Shiny Arceus's first release in Japan, Shiny Diancie in Japan, Shiny Jirachi event in Japan etc)

In any case, as flawed as my logic may be, it still seems rather odd that in this era that games and cards are intimately mixing, that a card would break the shiny lock,
but not have a corresponding event following it closely. I certainly do hope that an event for it is coming soon, as unlikely as that may be.
So what do you think? Do leave your comments below!

In any case, it may not be possible to get a Shining Volcanion any time soon, but if you want to obtain your very own Shining Celebi, it may be possible to get one with the upcoming Virtual Console release of Pokémon Crystal! Grab a copy on January 26, 2018!