I'm a professional developer using mainly C#. On the side, I write a ROM editor using VB.Net. They're very similar thanks to them mostly wrapping the .Net Framework, and because of how complex this application is, I'm in no hurry to rewrite it. This application knows the ins and outs of a few dozen file types and can, well, edit them. One such file type is a compiled LUA script. In order to edit these, they must first be decompiled. Rather than try to figure out that myself, I use a 3rd party tool that can do that for me (sometimes the best code is the code you didn't have to write). To use it, I point it to the compiled script on disk, and it spits out the decompiled text into its standard output. Integrating with it is simple thanks to .Net: I can use a Process object to start it, redirect its standard output, and read the decompiled text as it's written. This is all part of a larger process, where transparent to the user, I decompile a bunch of these scripts, automatically make some changes, and recompile them, all in one go, so people can play a game using different characters.

A few days ago, I did some refactoring to it so I can more easily get notified of unsuccessful exit codes when recompiling (previously the program would just continue fine, and any files with syntax errors would simply remain unmodified). Unfortunately for me, I was in a hurry and didn't test anything except that program before I pushed the change to the master branch and let my CI server publish a development build, currently the only way for people to get precompiled versions of my application. (The CI server is Team City, since they've generously given me unlimited everything with my open source license.) Also I don't have any tests covering this part of the code.

One of my application's users encountered some (well, dozens) of exceptions when my program tried to recompile the decompiled scripts. I try reproducing the issue, and I indeed find a syntax error in the same spot the newly-created error message said it was. After looking closer, I found the issue was there before the decompiled scripts were automatically modified. The script looked something like this:

It should be fairly obvious what the problem here is. The lines are doubled. I facepalm on the inside and start investigating.

Because the code I changed is being called about a dozen times on different threads, I did the responsible thing and wrote a test for it. After getting my test to fail for the right reason, I look at my code, and here's what I see: 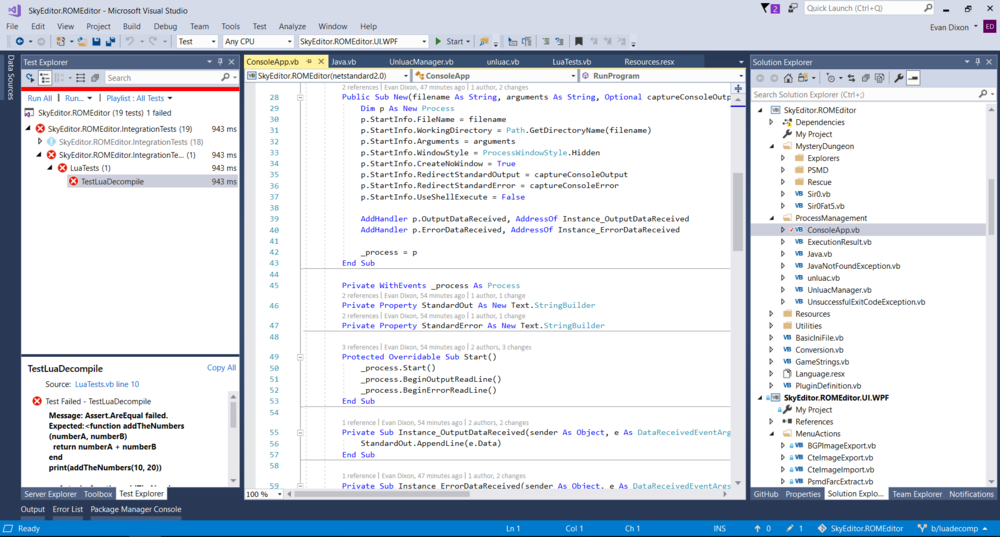 I tried a bunch of other things too. What you see above is actually after another thing I tried. Previously, I was dumping standard output and error into the same StringBuilder , in case the program was outputting to both for some reason.

I finally went to GitHub to check what actually changed when I did the thing mentioned in The Background above, and while it was a substantial change to the class shown above, it all seems pretty sane. But then I spot it. One crucial thing that didn't change. 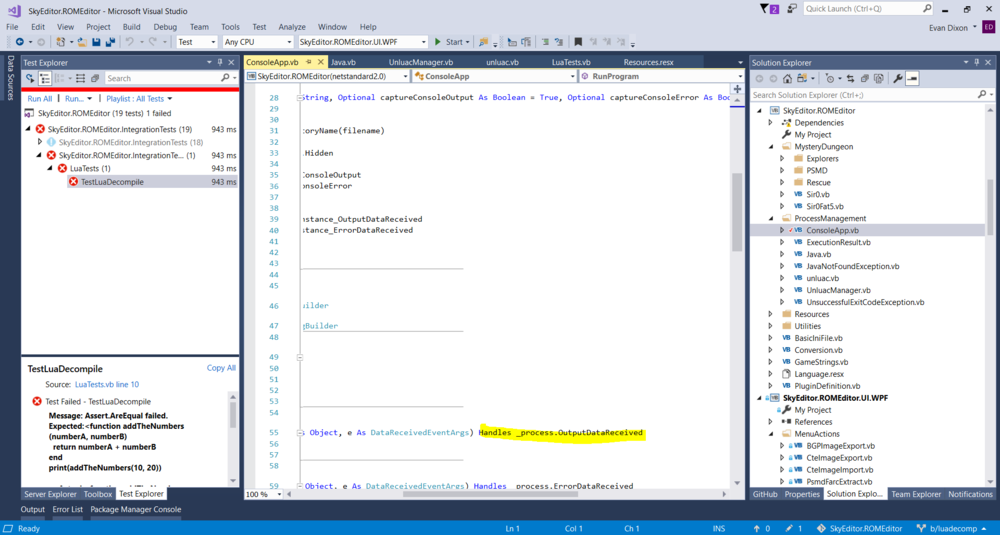 Oh. The event handler was registered twice. I added lines 39 and 40 (the two AddHandler lines) and forgot completely about the Handles clause.

Events are magical things that can be called, and event handlers that have been registered to the event are run, being given the data that was provided when the event was called. This isn't so much like method calls as it is interrupts.

The syntax for adding an event handler in C# looks like this:

And the syntax for adding an event handler in VB.Net looks like this:

Usually C# and VB.Net are very similar thanks to the .Net Framework, but sometimes there are some differences, where one language can do a thing that the other cannot.

The syntax for removing an event in C# looks like this:

And the syntax for removing an event in VB.Net looks like this:

To help make managing this easier, VB.Net has some extra syntax. Instead of manually adding event handlers, you can declare a variable as WithEvents, then use the Handles clause on a method, like so:

I've been using C# a lot more lately, I've had to start doing events the old fashioned, no hand-holding way. I've been doing it for long enough now that I forgot to even check for the Handles clause when all evidence pointed to an event handler being registered twice.

VB.Net is a fine language, and IMO it's easier to read and easier to type (not having to constantly type '{' and ':' when simply pressing enter works instead). However, it no longer has language parity with C#, meaning C# will continue to evolve, and VB.Net won't grow with it. The future is C#, and it's sad to see VB.Net be left behind.

Guess I'll have to get around to rewriting this thing for it to be part of the future.