Is there a Chinese and Korean Zeraora event? 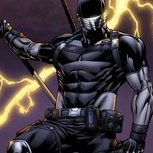