Will you still be playing Pokemon once gen 25 hits? 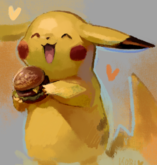 By KillerCorgi,
June 8, 2018 in Pokémon Franchise